Someone might have said that traveling „leaves you speechless, then turns you into a storyteller.”  For me, traveling is a means of enriching myself by revealing the past and encountering the different. It is the opportunity to discover paths and footsteps through time and space. In this particular aspect, I think I had the chance to be born in one of the most dazzling places human eye has ever seen. A land charished for its authenticity, wilderness and joyful spirit. The same that recently enchanted Prince Charles, who saved from the claws of time some old traditional houses of these lands. Or the same that inspired the famous, yet quite silly Dracula stories: Transylvania.

With its Romanian, Saxon, Hungarian or Gipsy inhabitants, it is a diverse and inherently rich landscape. Unfortunately, for the Saxons, the wind of change also brought freedom, but tragically eroded the sense of belonging. I often found myself a traveler following the destiny of the Saxon people in Transylvania, delighted by unique and nostalgic stories.

This is one of them – a story of a remote Saxon village called Boz, sheltered between the picturesque vineyards hills of the ancient Saxon “Siebenburgen”, Transylvania, Romania. More specifically, about two tabs of its tumultuous history, that paint this setting as if two different villages: the Boz village of the past and the present one. To the wondering traveler, this is just a numb point on the map of a wild, rather unknown country. But once your paths bring you here, you encounter a fascinating Aleph site, whose bricks reveal the destiny of an entire nation.

Boz of yore – the idyllic village

At the beginning of the twentieth century, its inhabitants – Saxons, Romanians and few Gypsies – lived together in harmony, respecting one another’s ethnicity and customs. Holidays were cheerful celebrations throughout the village, although the Saxon ones were full of feast and solemnity. The country life shifted between the plentiful camps surrounding the village and the Evangelical Fortified Church in the center. Fruitful fields were surrounded by unique mud volcanoes where buffalos immersed splashing the gobbling slush. The Saxon Church set to the skies its huge bell whose sound, somehow miraculously, used to break away mighty clouds and hail storms. Many children, running barefoot all day long, played their never-ending games that did not account for ethnic or language differences.

Later, after the 1940s, this peaceful village was crushed by the relentless events of the World Wars. Then, most of Boz Saxons were deported to cold Siberian labor camps. Only a few women, children, the sick and elderly remained home. It is proudly stated that the Saxon peasants of Boz – harsh, yet bold and funny people – would have written on the train that took them to Russia

Stalin, watch out for your mustache! The Saxons are coming!

But sadly, from where they went, not even half of them ever returned. Moreover, when coming home, the Romanian authorities denied to some of them the right to enter the country. Sick, disappointed and abandoned once again, the trains took the former Saxon villagers on another road, directly to Germany. Here is where many families would reunite later, after decades of longing and sorrow. 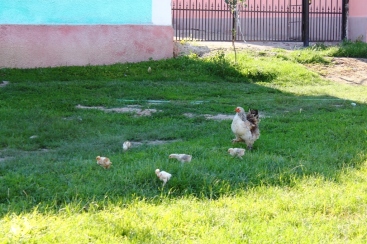 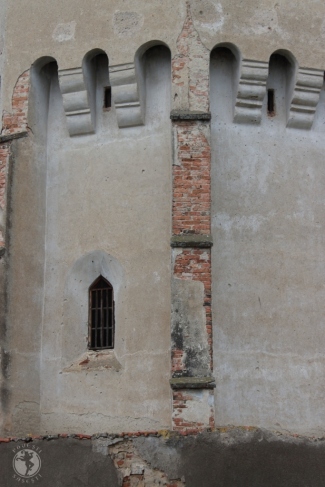 Like many of the previous Saxon villages, Boz is now inhabited mostly by Gypsies and some old, nostalgic Romanian peasants. Well-appointed houses of yesteryear are nowadays just a shadow of a leisurely, decent life. The 500 year old Evangelical Church – a medieval historical monument – has partly collapsed. Its bell still clinks his load, protecting of hardship a world that no longer believes in miracles. The mud volcanoes – a natural protected site – are still sulking an ancient sorrowful story, though seldom are they heard or seen. 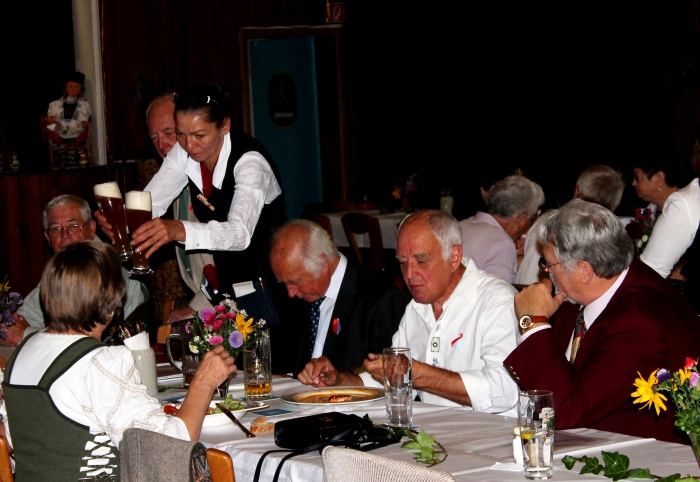 People from Boz meeting in Munich

The Saxons of Boz reunite in Munich

Somewhere in the world, the memories of some Saxons melt away like tears.

Once mesmerized by these people’s tearing eyes, I set foot to another destination on their destiny’s map: Munich, Germany. Every two years, more than a thousand kilometers away from the home village Boz of Romania, a handful of Saxons, meet in Garching, near Munich, Germany. They form here a small nostalgic community, whom I had the chance to discover. They are now just a bunch of old gentle lads, worthy of seventy to eighty years old, dressed in Saxon costumes. With tears in their eyes, they greed gladly to have gotten to see each other once again. On stage, they speak about „our church”, now exhibited in art works – starting bids in order to use the money for the Church’s renovation. They brought pictures of their children and grandchildren – generations born and raised in Germany – who have never visited Romania, nor do they speak Saxon or Romanian. They bring to life lost memories and places, cry, and do the diptych of those who have died since the last meeting. Even if Germany is the land of their ancestors, they were doomed to remain just some strangers here, nostalgic for a heavenly place in Romania which they call „home„.

Soon, after hours of remembrance, they will dance on the rhythms of the band. It’s sad to see them and think that soon their journey will finally come to an end and nobody will ever remember their existence or about the village of Boz, once inhabited by the Saxons.

Thinking of a possible redemption

Traveling may have many reasons. I was brought by faith or just some peculiar circumstances on the same path that former generations in my family had followed. To them, it was a road to heaven that sometimes passed through hell. To me, it was a way to discover myself.

When last time in the village of Boz, one of the few old Romanians left there, told me, with tears in his eyes:

God, if only the Saxons would return here once again!

Meanwhile, the old man died and his wish did not come true. Sometimes there are no happy endings and there’s never a way back, simply because neither we, nor the places left behind remain the same. Saxons probably won’t come back, but traces of their stay here deserve to be preserved and freed from the jaws of time, at least within our memory and soul. Or within a written history.

Unauthorized use and duplication of this material without express permission from this blog's author is strictly prohibited.